Saka, 19, scored and 20-year-old Smith Rowe was a commanding presence in midfield as the Gunners beat Slavia Prague 4-0 on Thursday — 5-1 on aggregate — to reach the last four for the third time in four years. 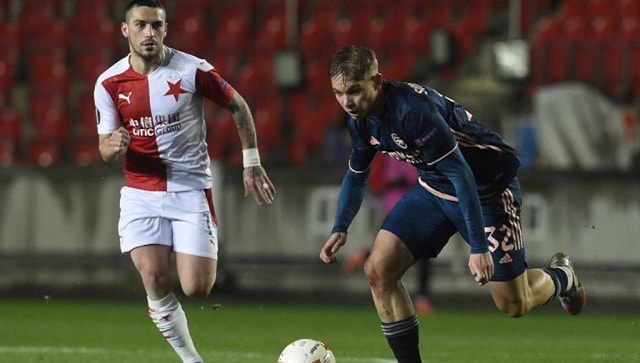 Saka, 19, scored and 20-year-old Smith Rowe was a commanding presence in midfield as the Gunners beat Slavia Prague 4-0 on Thursday — 5-1 on aggregate — to reach the last four for the third time in four years.

There they will meet Villarreal, managed by Emery, who won the trophy three years in row from 2014 when he was in charge of Sevilla and also took Arsenal to the 2019 final.

Winning the Europa League could be Arsenal’s ticket back into Europe as they are struggling in mid-table in the Premier League after an inconsistent season.

The performances of Saka and Smith Rowe, who had a goal disallowed but set up Nicolas Pepe for his opener, impressed Arteta.

Both players made their debuts under Emery, who was sacked in November 2019 after 18 months at the Emirates.

“How they behave, the passion and the commitment they have for the club. And then how much they like to play football.”

“You have to let them express themselves, and give them certain frameworks to work in and some ideas on how they can exploit their qualities.”

Their performances plus two goals from French striker Alexandre Lacazette made light of the absence of last season’s leading scorer Pierre-Emerick Aubameyang.

“He had two days in hospital to get the right treatment, but he’s feeling good now,” said Arteta.

“We will see how he recovers. I think he will need a few days to recover from that, but he wants to be back as soon as possible.”

I Just Found Everything Jeff Bezos Has Ever Reviewed on Amazon,...