ST. PAUL, Minn. — Should the Stars have a desire to secure a playoff spot in the tough Central Division, they’ll need to play better against the next divisional opponent.

With a 7-2 drubbing in Minnesota on Thursday night, Dallas dropped to 0-2-1 against the Central Division heading into Saturday’s game at home against St. Louis. The Stars also have upcoming games against Colorado, at Arizona and at home against Arizona on the schedule.

“When you give up seven, it’s hard to pin down one thing,” Stars forward Tyler Seguin said. “We kind of gave them the first three, at least. They had a couple fluky ones in the third. That’s a tough one. That’s a spanking. It’s a tough one.”

The loss denied the Stars just their third winning streak of at least three games since the 2020 postseason bubble.

Consistency has been a major issue plaguing the Stars and it’s reared its head particularly in divisional games. In Winnipeg, the Stars needed a third-period rally from a two-goal deficit to squeeze a point out against the Jets. A loss to the Predators last week led to a players-only meeting after the game. Thursday’s loss to Minnesota was the most lopsided of the season for Dallas.

“We have to play the same from first minute to last minute,” Stars forward Radek Faksa said. “Everyone has to know what to do and read from each other, so everyone will know what the other guy will do.

“Then you will play faster and you will be more on them, and be more consistent. That’s the reason. We have play the same, every guy has to bring the best every game and the other guys will read from him.”

Another Minnesota blowout: Thursday night’s loss was the second straight game that the Stars allowed seven goals to the Wild in Minnesota on an emotional night. Thursday was Ryan Suter’s return back to St. Paul after spending nine years there.

But Dallas’ last visit to Minnesota on Jan. 18, 2020 was Stephen Johns’ return to the lineup after missing a season and a half with head injuries. The Stars lost that game, 7-0, in their final game before the All-Star break.

The Stars 2-6-1 in their last nine trips to the Xcel Energy Center.

Faksa vs. Duhaime: Faksa and Wild forward Brandon Duhaime fought each other in the final two minutes of the game on Thursday night, but the fight came with some drama as well.

Faksa and Duhaime each earned roughing minors eight minutes earlier after getting tangled up at the Wild’s net-front. Duhaime dropped his gloves while Faksa was still on the ice, and the two were separated by officials.

After the two players exited the penalty box, they lined up next to each other at a faceoff and had a short conversation. Duhaime dropped his gloves before the puck was dropped, and was given two minutes for unsportsmanlike conduct.

“I asked him if he wants to fight me and he said yes,” Faksa said. “Just wait a few seconds after the drop, and he dropped it right away. I guess he tried to cheat, but it’s his problem. We got it anyways.”

Seguin’s rough night: Seguin had a minus-4 rating on Thursday night, when he was on the ice for five goals against, plus Jacob Peterson’s even-strength goal and Jamie Benn’s power-play goal.

It was Seguin’s second minus-4 night of his career, and first since Nov. 8, 2016 during a loss at Winnipeg. Seguin did pick up a primary assist on Peterson’s goal Thursday.

“I was on the ice for almost every goal, it felt like, for us and for them, it seemed like,” Seguin said. “So definitely not good enough.”

Peterson’s ice time: Peterson finished with a team-low 9:30 of ice time, including just 5:26 during the first two periods.

“The power plays and the penalty kills disrupted his ice time,” Bowness said. “Then you’re trying to get more guys going. It was one of those nights for him, his line is up and all of a sudden, there’s a power play or there’s a penalty kill. You’ve got to get the rotation again.”

Peterson also had just two shifts against the Red Wings on Tuesday night.

Other missed storylines: While Riley Tufte’s healthy scratch ruined one storyline, there were a few others missed on Thursday night.

Nick Bjugstad was a healthy scratch for Minnesota. Bjugstad is best friends with Tufte’s brother, and the two have never played a game against each other. Tufte has been compared to Bjugstad (because of their size and state of origin) many times before, and he’s the reason Tufte wears No. 27.

Jordie Benn was a healthy scratch for the Wild, meaning he did not play against his brother, Stars captain Jamie Benn.

Jake Oettinger did not start after making 30 saves on Tuesday against the Red Wings. Oettinger was suiting up for the first time as an NHLer in Minnesota, his home state.

— Khudobin started in net after making 31 saves in a win over Philadelphia on Saturday night. He backed up Oettinger on Tuesday against the Red Wings as he recovered from a non-COVID-related illness. Bowness said Khudobin was back to full strength.

“Coming off of a great game,” Bowness said before the game. “Division game, it’s a big game for us, so Dobby’s the guy tonight.”

Khudobin allowed a career-high seven goals on Thursday. His previous career-high was six goals: April 5, 2019 with the Stars at Chicago and April 2, 2015 with the Hurricanes at Florida.

— Bowness said injured goaltender Braden Holtby would skate Friday and the team would “see where he is.” Holtby (lower-body) has not played since Nov. 10 against Nashville. 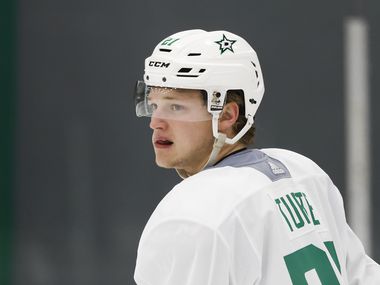 Baker Mayfield puts points on the board in Panthers debut

Blue Bombers take down Lions in battle of unbeatens for 5th...

‘Hoping our best football’s ahead of us’